To resolve the membrane insertion and folding process of the membrane protein OmpA in more detail, I developed a new technique, Time-Resolved Distance Determination by Fluorescence Quenching (TDFQ). The technique is based on a method previously used to determine the depth of a tryptophan residue of a protein in a lipid bilayer in thermodynamic equilibrium.

1. Determination of the Distance of a Fluorophore from the Center of Lipid Bilayer.

To determine the location of tryptophan residues (or any other fluorescent group) of an integral membrane protein or peptide, a set of samples (typically 3-5) of lipid bilayers is prepared. Each sample consist of the host lipid and a labeled lipid carrying a fluorescence quencher group. The position of the fluorescence quencher group in the labeled lipid is different for each of the prepared samples. The label group is small and acts as a static quencher. Most commonly used are dibromo-lipids or lipid spin-labels. The Figure below illustrates the information obtained from fluorescence experiments with membrane embedded quenchers. On the right hand side, it is indicated that the fluorescence intensity of a Trp residue of an integral membrane protein will be most quenched the closest the Trp is located to the quencher (this Trp shown in black). On the left hand side models of phospholipids are shown that carry fluorescence quenching bromine atoms at different positions along the sn-2 acyl chain of the phospholipid. The distances of these positions from the center of the lipid bilayer are known from X-ray diffraction experiments on some of the phospholipids (table in the middle of the figure). Comparisons between the fluorescence intensities of a fluorophore in presence of each of these different quenchers will allow to determine the position of the fluorophore in the lipid bilayer. (Those labeled lipids which carry the quencher at a depth in the lipid bilayer which is similar to the depth of the fluorophore will reduce the fluorescence more than others.) 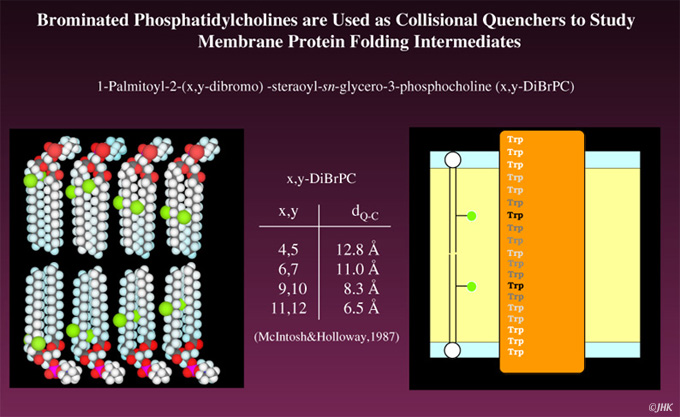 Currently, two methods are used to calculate the depth of a fluorophore in a lipid bilayer from a fluorescence quenching profile that is obtained from the relative fluorescence intensities in the presence of each of the different quenchers. The parallax analysis and the distribution analysis. First, the parallax method was developed by Chattopadhyay and London (1987). The equation used for the determination of the distance between the fluorophore and the center of the lipid bilayer is derived from the Perrin equation for fluorescence quenching, assuming hard sphere quenching. In this method two quenchers are required for distance determination. The result is the more accurate, the closer the quenchers are located to the fluorophore. Later, the distribution analysis method was developed (Ladokhin et al., 1991, 1993). This method assumes a gaussian distance distribution of the depths of the fluorophore and the quencher in the membrane and an exponential decay of the fluorescence intensity with decreasing distance between quencher and fluorophore. Both methods can in principle be used in time-resolved distance determinations by fluorescence quenching (TDFQ).

In time-resolved distance determinations by fluorescence quenching, distance information is obtained during translocation of the fluorophore with time. The time courses of fluorescence changes are monitored in absence and in presence of different membrane bound quenchers. Therefore, a number of kinetic experiments are performed which are later simultaneously analyzed. I have chosen to use distribution analysis to obtain the depths of Trp residues during protein insertion into the lipid bilayer and protein folding. This choice was made, because the time dependent translocation of the Trp residues across the lipid bilayer is most likely not synchronized between different protein molecules. At a given time some fluorophores (Trp residues) have progressed more than others along the reaction coordinate of membrane insertion and folding. A distribution of Trp distances from the bilayer center is therefore most likely. In TDFQ experiments, this distribution describes relocation of Trp residues with time (kinematics, Trp movement in projection to the membrane normal). In contrast, distribution analysis was originally developed to calculate distances between a quencher and fluorophore of an integral membrane protein in thermodynamic equilibrium.
In my studies about the membrane insertion and folding of outer membrane protein A, most of the quenching data could be fit well to gaussian distributions. Still, the choice of a gaussian is empirical and not based on a theory about the distribution of Trp trajectories projected on the membrane normal. Although the parallax method gave similar results in the analysis of some time courses of quenching data, its a priori application to a kinematic process does not appear intuitive. The parallax method will most likely give good results if most fluorophores are trapped, for example in a stable folding intermediate.
The TDFQ analysis can be automated with a small computer program. The quenching data is fit to the distribution analysis equation at each time fluorescence data was measured for the samples containing the various quenchers. With the parallax method in its original form, the most efficient quenchers would have to be determined first before the fluorophore distance can be calculated (assuming there is no distance distribution of the fluorophores).
TDFQ measurements can be performed to investigate any conformational change of fluorophores induced by a certain event. The folding of integral membrane proteins can be viewed just as an extreme case of conformational change. Since the change in Trp location during insertion and folding of a membrane protein was likely to be very large (based on the topologic model of outer membrane protein A by Vogel & Jähnig, 1986), I developed and employed this technique to investigate the Trp translocation through the lipid bilayer for the folding and insertion process of OmpA.

With the development of TDFQ it could be shown that it is possible to determine the locations of a fluorophore in a lipid bilayer in a dynamic process, such as membrane protein folding. In studies of membrane protein folding, the location of a fluorophore was obtained as a function of time during folding of the protein in the bilayer at selected temperatures. Distance changes during insertion of proteins and peptides into lipid bilayers were monitored for Tryptophan, therefore, in single Trp mutants of the protein, on the level of an individual amino acid. Valuable information was obtained for example on intermediates in the folding process.

Since insertion and folding of OmpA is strongly dependent on temperature, fluorescence data are shown below at different temperatures.

3.1. The adsorption of OmpA at the lipid bilayer surface at 2 °C. In 3-dimensional graphs, the depth of the fluorophore can be more quickly guessed as shown in the Figures below. The third dimension (x-axis) is given by the known distances of the quenchers from the bilayer center (see table in Figure 1 of this page). For OmpA membrane insertion and folding, it was found that folding progresses in different stages. These stages were resolved when experiments were carried out at different temperatures. At 2 °C, OmpA remains surface adsorbed and the quencher close to the aqueous interface is most efficient (see Figure below). This result is confirmed by acrylamide quenching experiments (not shown), which demonstrate that the Tryptophan residues in OmpA are exposed to the aqueous quencher at 2 °C 3.2. Penetration and translocation of tryptophans.

At temperatures less than 27-28 °C, the Trp residues move deeper into the lipid bilayer with time, as shown in the next Figure below. If a Temperature of 30 °C or higher is chosen, the Trp residues are initially found deep in the lipid bilayer (first data point taken 20 s after initiation of folding). The initial phase of bilayer penetration is no longer resolved. At later times the fluorophores move away from the center of the bilayer closer to the membrane surface, as indicated by the changes in fluorescence quenching efficiency of the different quenchers. 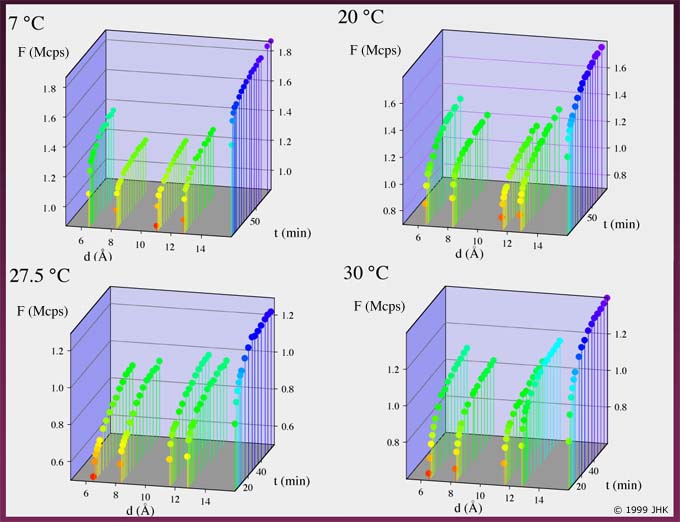 The average location of the Trp residues in OmpA can be estimated using distribution analysis. The Figure below shows the resulting fits at a few time slices of the OmpA refolding process at 2 and at 40 °C. The minimum of the fit function indicates the average fluorophore location. The quenching probed by brominated lipids and the calculated average Trp location are well visualized in form of 2D x-y plots put together into a movie.

The average fluorophore location can now be plotted as a function of time. 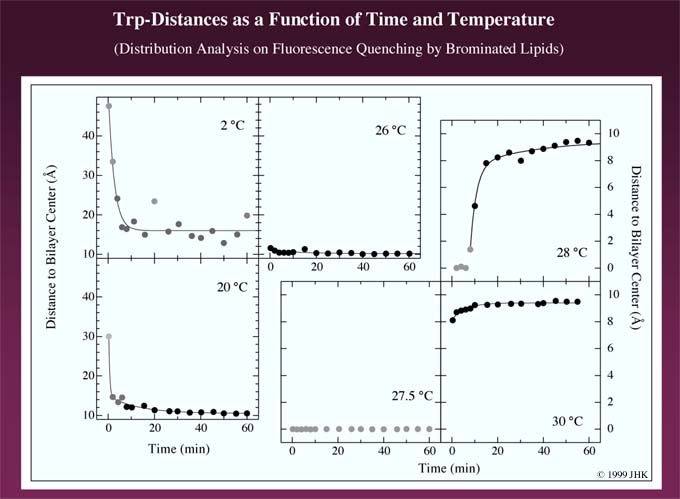 The average position of the 5 tryptophans in OmpA, which is determined by TDFQ at different temperatures, indicates that there are 3 membrane-bound intermediate states that are stabilized at 2 °C, ~7-26 °C, and 27-28 °C before the native state of OmpA is folded: The mechanism of OmpA folding can be further elucidated by using single Trp mutants of OmpA and employing the TDFQ method.